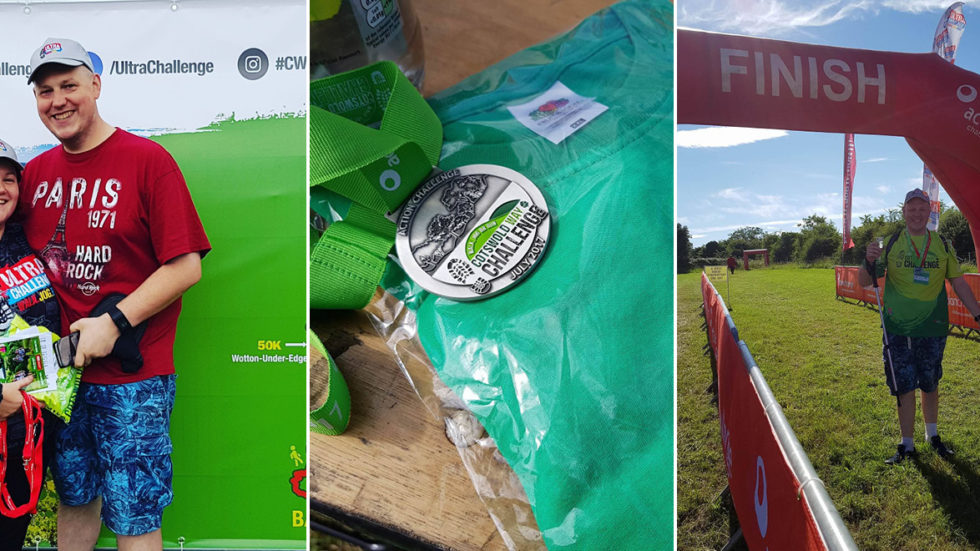 A brave and battling couple from Horley took part in the Cotswold Challenge in July to raise money for MacMillan Cancer. Tackling a route of 25km, Sallyann and Finch Richardson took on a tough course which Finch completed, but sadly due to an injury just days before Sallyann had to retire.

The pair took on health conditions as well as difficult terrain as part of the Cotswold Challenge on Saturday, July 1 in honour of Sallyann’s best friend Loretta’s dad who passed away following a battle with cancer in July 2016, Sallyann says she wanted to show her support to Loretta’s dad Martin.

Sallyann, 37, and Finch, 41, were scheduled to take part in the 50km but due to Sallyann’s health – she has fibromyalgia and arthritis they decided on the 25km. Fitness fanatic and charity challenger, Sallyann signed up for the Cotswold Challenge, making it her fifth charity walk in three years.

16 years-ago, she was diagnosed with fibromyalgia and was told she might have to limit activities. Sadly, all too often friends who did not understand fibromyalgia stopped inviting her out or talking to her because every time they invited her out, she did not have the energy after work to go out.

Fibromyalgia has more than 280 symptoms and is largely an individual illness because it causes such differing ailments including chronic widespread pain, dizziness, pins and needles and depression to name just a few of the symptoms which can damage the careers and personal relationships of sufferers.

Today, thanks to supportive doctors, specialists and pain clinics, Sallyann has learnt that she can do anything if she puts her mind to it, and that real friends understand that having a full-time job tires you out enough and understand when you cannot go out, and support you.

Sallyann, says: “I am crazy to do these walks, so if just one person decides to get up and walk for five minutes or decides to think more positivity and realise that there is support out there for them, then my walk has done what it’s meant to!”

Battling Sallyann, said: “I sadly had to pull out at 16km as before the walk I had dropped an object on my toe which put me in A and E. I was allowed to walk on it, but during the hike I ended up with my achilles tendonitis kicking in to the point where I couldn’t walk and had my knee and leg swell up.”

Looking ahead to the future, Sallyann, said: “Although I did not finish, Finch did and I am very proud. St John’s Ambulance were amazed that with my fibromyalgia and foot injury that I participated and kindly gave me a medal and t-shirt for my determination and amazing effort.’

“We both hit our fundraising targets of £200.00 and although this was supposed to be my last walk, due to my disappointment that I didn’t complete the full 25km we have both signed up for the Jurassic coast 25km 2018 for pancreatic cancer”.

If you would like to donate to Sallyann and Finch’s fundraising efforts, visit their JustGiving page: www.justgiving.com/sallyann-richardson37[/box]