With a New Year, comes a brand new feature: Henry’s Heroes! Nominated by Crawley MP Henry Smith, this highlights the amazing residents we have, here in RH10 – so get ready to feel inspired.

Our first of Henry’s Heroes is Trudi Bubb, a Crawley resident, about to set sail on Clipper’s Around the World Race on 15th January, which will see her taking on 20,000 miles of open water, be away from home for six months and hopefully raise her aim of £20,000 for The Golden Lion Children’s Trust based in Crawley.

“I have wanted to take part in the Clipper Round the World Yacht Race for over ten years, but I never really had the opportunity to take time away from my very busy career and lifestyle,” the local businesswoman, told us.

“Then in 2013 I received a call advising me I had been successful in obtaining an interview. For me it was very emotional having fought back from being diagnosed with M.E. (Chronic Fatigue Syndrome), Fibromyalgia and a cancerous haematoma to be considered for the race. After being informed that I was one of 680 in the world to compete in the race, I decided to pay for the race myself and raise an additional £20,000 for children in Crawley, as I wanted to take as many children as possible to Lapland when I return, later in 2016.”

The Clipper Round the World Yacht Race is the only one of its kind in the world, where organisers supply the fourteen identical seventy-foot yachts, completely stripped back, but manned by a professional skipper, who will help lead Trudi and her team, safely, half way across the world. Trudi will be representing Team Unicef, along with a crew team of fifteen to twenty people per leg. 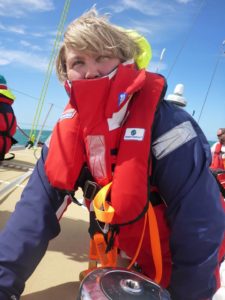 So what is our hero looking forward to the most?

“I am looking forward to visiting various countries whilst taking part in the race and overcoming my own internal fear,” she said.

“Life is too short and to be an inspiration to others is an incredible feeling. Taking time out of our busy schedules means such a lot to people and individuals who cannot do it themselves. To do something for others and to be a light in someone’s darkness is a very incredible, emotional experience, especially when you see that person smile or say a small thank you. To give yourself to others is such a selfless act but can bring so much happiness and help those who you help,” Trudi added.

Follow Trudi’s journey with updates on www.trudibubb.com. If you’d like to donate to Trudi’s chosen charity; The Golden Lion Children’s Trust (which aims to help and bring happiness to special needs and underprivileged children) visit: www.justgiving.com/Trudi-Bubb

Follow Trudi’s journey with updates on www.trudibubb.com. If you’d like to donate to Trudi’s chosen charity; The Golden Lion Children’s Trust (which aims to help and bring happiness to special needs and underprivileged children) visit: www.justgiving.com/Trudi-Bubb

[box type=”shadow” align=”” class=”” width=”800″]Henry said: “It was a pleasure to meet with Trudi recently, and I am delighted that RH Uncovered have named her as a Community Hero.”

“Trudi will be away from home for six months on her round-the-world sailing challenge and it is a testament to her that she is raising money for the Golden Lion Children’s Trust, which provides assistance to special needs and underprivileged children.”

“It was fascinating to hear from Trudi how the race works, and the level of dedication and concentration that her and her crew mates will need to show.

“I hope that Crawley will get behind Trudi’s efforts as she seeks to raise funds for a great local cause.” [/box]