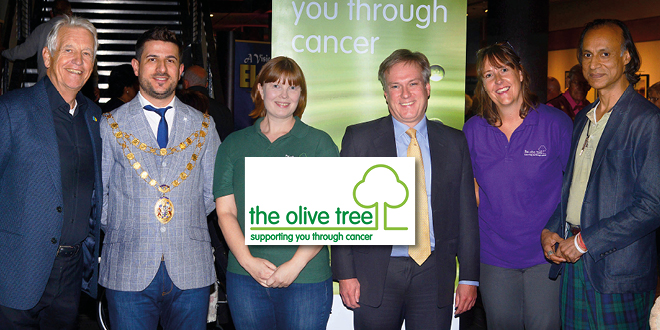 Emerging from Blood Cancer Awareness month into the pink focus surrounding Breast Cancer Awareness some of the realities of having a cancer diagnosis were highlighted upon with a newly written play Bodies at The Hawth on Monday, October 1 with donations taken and raffle tickets sold for the Olive Tree Cancer support centre on the night. The event went some to highlight the 370 men diagnosed in the UK each year (www.breastcancercare.org.uk).

The evening was attended by many Olive Tree supporters, those who have links in supporting those with cancer in the Crawley and wider Sussex community, including the Mayor of Crawley, Carlos Castro, BBC News reader and Olive Tree President Nicholas Owen and Crawley MP Henry Smith who chairs the All-Party Parliamentary Group for Blood Cancer awareness and is an Olive Tree supporter.

Written by Raminder Kaur, the Crawley-based artistic company Sohaya Visions and collaborated with the Mukul and Ghetto Tigers with funding from the Arts Council to allow the team to research, focus, develop, perform, and expand the script.

When one in two people are likely to get cancer in their lifetime knowing what to do and how to deal with it becomes more important. Bodies is an experimental, multi-media show that combines tragedy with comedy, weaving ancient Indian and contemporary stories about dilemmas of the body, mind and people’s experiences with cancer.

A Question and Answer session took place after the play which was chaired by Nicholas Owen and brought the team of performers and creatives some great feedback.

Kusum Chaplain, manager of the Cancer Research UK Windsor shop, said: “The play should be taken to more locations to improve the conversation around cancer. The performance was awesome.”

Bodies Cancer Play & The Story Behind It…

Shine member Craig Bakin said: “The music, acting and effects and characters were very interesting and inspirational, it was wonderful.”

Shine is a unique charity which supports young adults from ages 20-50 with all cancers across the UK including Shine Sussex that hosts local meet ups.

Bodies is a new Spacehive crowdfunded initiative backed by Crawley Borough Council with a fantastic £800 pledge. For more information, visit: www.spacehive.com/bodies – the crowdfunding page is open to more pledges of, £5, £10 and upwards – the crowdfunding closes on Monday, October 8.

MP Henry Smith added about the show: “It has been a very moving performance which goes across the spectrum of peoples experience of cancer…. A remarkable show.”

Secure A Special Grant For Your Community Group From Gatwick

Join The Children’s Trust For An Eggcellent Easter Fair