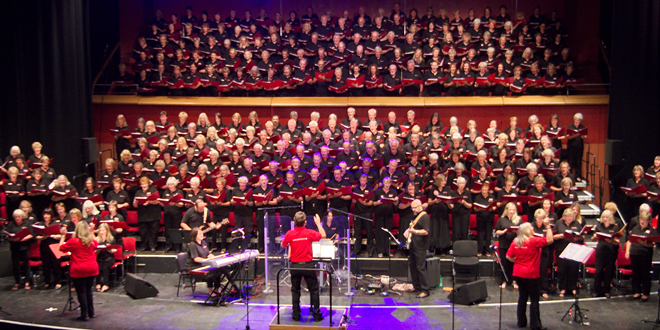 If you enjoy singing, an East Grinsteadchoir is the place to make your voice heard

Singing makes you feel good, and one place where anyone can enjoy its benefits is in a choir.

In the past few years, many people have chosen to become members of inChoir, which has 13 branches in this area stretching from Shoreham to Oxted, and Crawley to Tunbridge Wells.

Musical director Mark Heppell sets the music across all 13 of the choirs so that everyone is singing the same repertoire.

He also runs six of the inChoirs, including one in East Grinstead, which meets at the Jubilee Community Centre in Charlwoods Road, on Tuesdays.

Mark started inChoir in February 2009, “I’d been involved in am dram for a while and thought it would be nice to have a singing group where everyone could be involved,” he says.

“I liked the idea that people who liked singing could, if they wanted to, bring their mum, sister, husband, anyone in the family, to something that they would all enjoy.’

“When you sing it makes you feel good – if you’ve had a tough day at work or with the kids you can came and sing and it improves your mood.”

The choir’s repertoire focuses on popular songs from the 1950s to the present day. “Some of the songs we’ve been singing recently include I Only Want to Be with You, Heatwave, Thinking Out Loud and Moon Dance,” Mark adds.

During the past seven and a half years, the East Grinstead choir has played with other inChoirs at many venues, including at the London Bridge City festival and Brighton Dome.

The choir has also performed locally at the town’s midsummer market and will be appearing at East Grinstead Live on August 7. 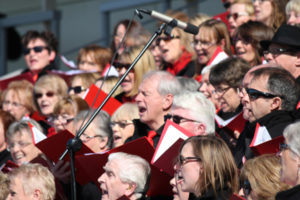 They also get to go further afield. “We’ve just returned from Tuscany where we all put on several pounds with the pasta!” Mark says. “We sang there with a local choir, which was an absolute joy.”
Other visits have included a trip to Disneyland in Paris and a cruise in Norway to see the Northern Lights.

Being part of the choir is also a way of making new friends. “Many friendships have been forged although we’ve not had a marriage yet!” Mark says.

“During the summer, we are busy performing at summer fetes and shows. We run along school terms and have August off so we will be getting back together again in September.

“It is an extraordinary privilege to stand in front of a group of people and to teach and conduct them. When they all sing together it sounds amazing. It washes over your and I defy anyone standing where I am not to get a real buzz out of it.

“The key is that everyone enjoys it. What we do transfers itself to the audience and everyone has a great time.”

Saffron Adds A Pinch Of Flavour To The High Street

Lady missing from Crawley Down (has now been found)