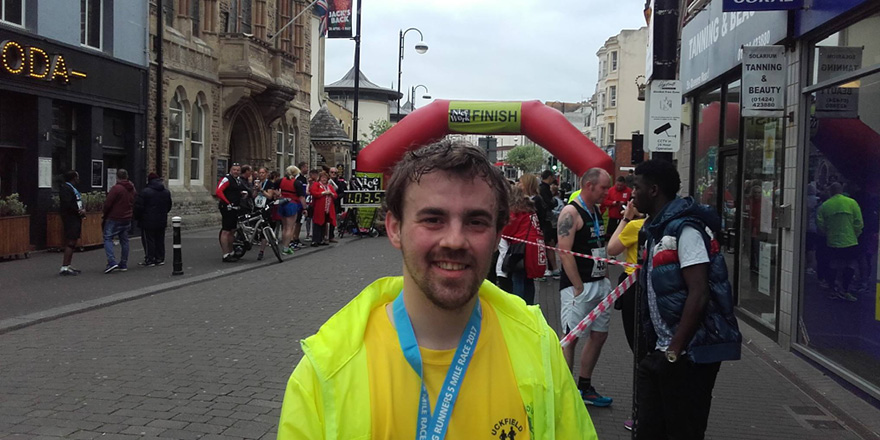 What does it take to be a marathon runner? The gruelling event which is a little more than 26 miles in length and with its origins in Ancient Greece is a daunting one, but for an athletic Sussex resident, the marathon is something to rise to.

Michael Hill, 30, works nights in a supermarket but when he checks-out he likes to bag a marathon or two – it is his passion and the runner can be found hitting the streets of Sussex. This marathon man does not limit his ambitions to Earth either, as well as working and running, he is studying for an Open University certificate in Astrology and Planetary Science.

Michael says he was inspired to get his running shoes on and take part in the London Marathon from a young age but was not sure at first how he would go about it. He saw two of his teachers take part in the famous race through the streets of the capital and decided he would look into applying for a marathon and nine years on, he has ran in races worldwide.

Michael said: “When I took part in my first race way back in 2009 I found it to be one of the most painful physically and mentally yet enjoyable experiences of my life. I not only completed the race but received a medal. This was a highlight and something I will remember forever – a sense of success and accomplishment, it meant so much.”

One of the challenges Michael faced in that race and in subsequent races is adverse weather conditions – during the 2009 London Marathon for example he finished the race suffering from second-degree sunburn. The sunburn was not to deter Michael – he explains that it was something a member of the crowd said to him as he slowed down, and to this day
it is his adopted motto.
“A member of the crowd lent over to me and said: ‘Pain’s temporary, pride’s forever’ and that’s been with me ever since.
Since then, I have ran with running clubs, and running has taken me around the world – I have run in Los Angeles, Sydney and ran in the first-ever Disneyland Paris Half-Marathon in 2016. Last year I ran 100km in a special, single year!”

As well as sunburn Michael lists his other injuries as knee damage, a dislocated shoulder and sheared heels – on occasions he has been nothing if not bravel. The sacrifices though for him are worth paying – through his running he has raised money for good causes including Cancer Research UK.

Sussex Site Named Tourist Attraction Of The Year For 2019

Time Is Running Out For Sussex Schools To Recycle With Michael