The East Grinstead Model Engineering Society was formed in 1949 by a group of enthusiastic friends who all had a passion for model railways. Today, the society is run entirely by volunteers who very much enjoy what they do!

Although members are mainly locomotive orientated, there are many who also have an interest in all aspects of modelling and engineering. Some of the members build and fly model aircraft, others build and engineer traction engines, stationary engines and model boats.

As much as possible all the engineering, whether it’s large or small is fabricated in house. The clubhouse, which is based locally in East Grinstead is well equipped with lathes, milling and drilling machines, which can also be used by members to build their own models.

As Malcolm Hearn from the club says, modelling can be an expensive hobby so the use of a workshop equipped with tools makes it more accessible to more people. For some, the expense of buying all the necessary tools and having a suitable place to build could be off-putting.

In addition to the practical side, the Society also arranges visits out to other club tracks and places of interest further afield. Malcolm admitted that it still is mainly a male dominated interest, but there are a number of women involved in the hobby around the country.

Far from being an isolating hobby, where people operate a model railway in their loft, the club is very social, meeting on a Wednesday evening and welcomes new members to join them for a cup of tea and some model making talk and activity.

The Club makes a small income to keep going by running it’s 5” gauge, ground level steam operated railway at public events all across Sussex. It is a firm fixture at local fetes and also the East Grinstead Town Day, where members of the public pay a small fee to ride the train. 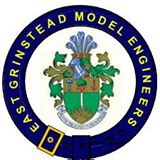