This month, we’re marking the 30th anniversary of the death of the British Prime Minister he was visiting – Harold MacMillan, affectionately known as ‘Super Mac’.

British Prime Minister Harold MacMillan lived at Birch Grove, near Chelwood Gate for many years of his life – the house had been built in 1926 for MacMillan’s parents Maurice and Helen.

Harold Maurice MacMillan was born on February 10 1894, in Chelsea, his father was head of publishing at the family firm, MacMillan, and his mother was an American socialite.

Harold had two older brothers – Daniel and Arthur and studied at Eton and whilst at Balliol College, Oxford he signed up to the Grenadier Guards at the outbreak of the First World War.

He served with distinction in France being severely wounded in the hip at the Somme, this brought an end to his military service and left him with a slight limp for the rest of his life. 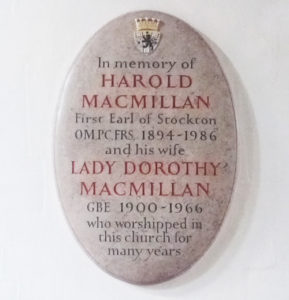 After the war, he didn’t return to Oxford, instead he joined the family publishing house and stayed there until 1940 when his ministerial duties became too much.

He had been elected as an MP for Stockton-On-Tees in 1924, a seat he lost briefly before regaining it two years later, the 1920s also saw him marry Lady Dorothy Cavendish.

MacMillan served as Minister for Housing, Minister of Defence, Foreign Secretary and Chancellor of the Exchequer and when Anthony Eden stepped down MacMillan became Prime Minister.

In October 1963, MacMillan resigned as Prime Minister following a difficult year which culminated in the Profumo scandal and at the same time a misdiagnosis of prostate cancer.

During retirement, he enjoyed the quiet life, only occasionally commenting on issues – during the 1980s he claimed the government’s privatisation programme was ‘selling the family silver’.

MacMillan died peacefully at Birch Grove months short of his 93rd birthday – he is now buried in the family plot at St Giles church, Horsted Keynes and fondly remembered as ‘Super Mac’.

Harold MacMillan isn’t the only Prime Minister with links to Sussex, here’s a list of five others: