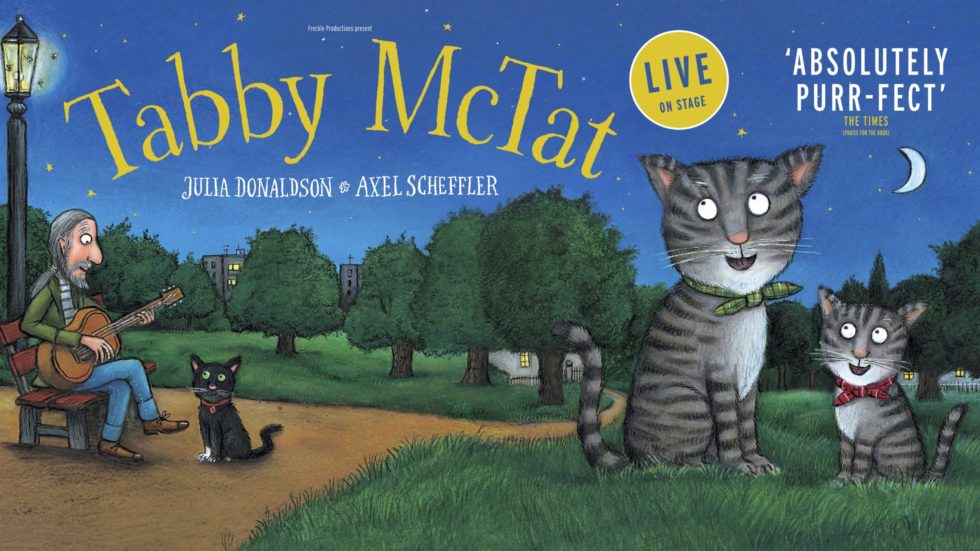 Freckle Productions is bringing the purr-fect family treat to Brighton this summer! Based on the book by Julia Donaldson with illustrations by Axel Scheffler, Tabby McTat will play at Theatre Royal Brighton on Monday, August 5 and Tuesday, August 6 as part of a UK Tour.

Tabby McTat is a busker’s cat with the loudest of meows! He sings all day long with his best friend Fred, until one day they get separated. Tabby finds shelter and a new life with all the home comforts a cat could dream of, but he soon misses his old friend. Will they ever find each other? Brought to life on stage with original songs and Freckle’s distinctive style, Tabby McTat is a heart-warming story of friendship and loyalty.

Best known for her popular rhyming stories for children, especially those illustrated by Axel Scheffler, Julia Donaldson is the multi award winning author of some of the world’s best loved children’s books, most notably the modern classic The Gruffalo which has sold over 13 million copies worldwide.

Tabby McTat is adapted for the stage by Freckle Productions, whose other acclaimed productions include Zog, Stick Man and Tiddler and Other Terrific Tales. It is directed by JJ Green and Bobby Delaney with original direction by Alan Lane. Music is by Bobby Delaney, lyrics by JJ Green and the design consultant is Zoe Squire. The cast features Anneka Gouldbourne, Paul Hilliar, Rhîan Mclean and Luke Rees – Oliviere.

Suitable for children and families of all ages. Running time: one hour.

Alexx hits the dancefloors of Crawley and Ibiza!

Reigate And The Ashes