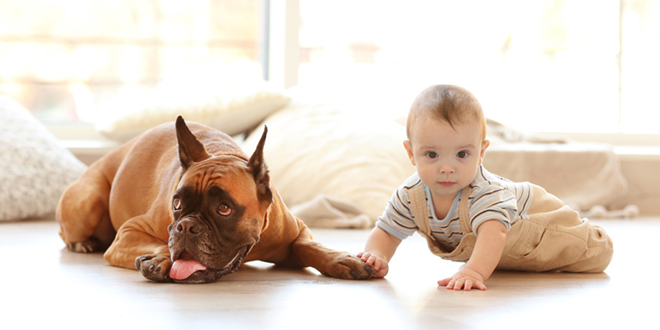 We’ve all heard the saying; “a dog is man’s best friend”, but in fact it seems that they, along with other pets such as cats, rabbits, guinea pigs and hamsters, form meaningful and firm friendships with our children, that can be completely life-enhancing.

As we ‘Aah’ (and reach for the camera!) while they play or take naps together, their cute bond has a deeper, positive effect on their emotional, social and physical wellbeing.

Emotional Benefits
As a 14-year-old, Michael Jackson sang about his pet rat, Ben; “With a friend to call my own, I’ll never be alone, and you, my friend, will see, you’ve got a friend in me.” Family pets provide our children with a genuinely meaningful friendship that stands the test of time. Recently, a study from the University of Warwick found that 85% of children thought of their pet as a friend. It also found that 40% of those asked would seek out their pet if they felt upset.

This could be because they can turn to their furry friend, without fear of being judged or their problems being repeated, the Pet Health Council say.

“Children often find them easier to relate to (the world of grown-ups is often quite confusing!) They know that animals will not judge them, will not ‘break friends’ with them, and will not tell tales,” they explain.

Social Development
Don’t be worried if you think your child is shunning other forms of friendships in favour of talking to your pet. The chances are that your pet has helped them to connect with others! Children are more likely to approach and get involved with another, if they are playing with an animal as it bridges the socially awkward gap and shifts the focus from them.

The American Center for Research explored the link between companion animals and childhood anxiety (which can significantly hinder social experiences) and found that it can be eased. The study saw lower blood pressure measures, lower heart rates and reduced behavioural distress. With anxiety now affecting 290,000 children and young people in the UK (according to mental health charity Young Minds), a pet could play a powerful part in combatting the impact it has on your child.

Physical Improvements
As well as the obvious exercise benefits of walking or playing with pets, there are plenty of other reasons that they improve physical health. From hand-eye coordination (which can happen when your child scoops food into feeding bowls, for example) to reducing the risk of allergies, your pet may be helping your child’s physical development more than you think.

The Medical College of Georgia in America found that having pets decreases a child’s risk of developing certain allergies such as hay fever and house dust mites by 75%. The theorist behind the study believes this is because animals can transfer bacteria and in the process, builds a child’s immune system.

Questions To Ask A Nursery

From Albert Square to Children’s Literature

Life Skills For Children In 2020

Questions To Ask At Parents’ Evening