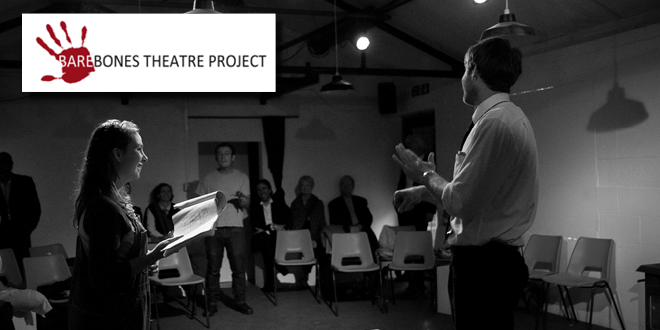 The Barebones Theatre Project is looking for a new home for their growing and ever-changing collection of actors, artists, designers and musicians who live in and around Forest Row.

Director Naomi Wirthner is passionate about what she does, as are her enthusiastic team of Gary Wright, Jeannie Joubert and Charlotte Harvey, and supporting actors, some who have been involved since 2010.

There is more than a bit of a buzz around this group – after watching a performance in a yurt on a December night in Forest Row, I left feeling I had witnessed more than at many West End shows I have seen.

It was the Anthony Neilson play, The Night before Christmas, a dark take on Christmas that prompted more questions than it answered. Sitting up close and personal with the actors made it an edgy performance.

Barebones first production; Happened was performed in the cellar of the local pet food store in 2010, in another show remnants of grain were swept to create a derelict farmhouse for a performance of African Gothic by Reza de Wet.

Since, spaces have been set up anywhere and everywhere, from a yurt to a converted dairy; rarely do they perform in conventional theatre spaces. Currently, they rehearse and perform at Springhill Farm in Forest Row, by kind permission of the Douch family.

Naomi’s process is actor based, her question when in the rehearsal room, is, ‘how do we keep the performance living when we open our doors to our audience?’ As an actor, directing for Barebones Theatre Project has given her the chance to explore performing.

With limited time and money, actors have been encouraged to become as emotionally naked as possible. The actors have grown in number from in and around Forest Row, but also they have been able to host performances by well-known actors and directors.

Recently, a Donmar Warehouse production of Faith Healer featured stage and film actors Stephen Dillane, Ron Cook and Gina McKee. All the three actors relished the experience of their relationship with the audience becoming not only intimate but also interactive.

Barebones now need their own space where they can rehearse, create, host and perform. Currently, at the farm or yurt, the audiences are around 60 but to become self-sufficient, the company would like to double this.

Their next exciting venture is a community play, from which they have requested funding from Wealden Council. They look forward to seeing you at their next production, and if you
have a space to convert, either to lease or buy do get in contact with them!

[box type=”shadow” align=”” class=”” width=””]You can become involved and support the company by joining as a member, which will also entitle you to advance notification of up-coming events and ticket sales, visit: www.barebonesproject.co.uk[/box]

An invasion of Elves