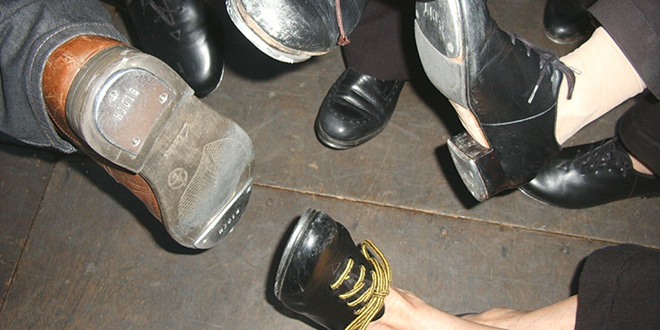 If you’re looking to join a great local group, with a toe-tapping difference, grab a pair of dancing clogs and head to Charlwood Parish Hall, to take part in Anocalypse Now, on Wednesday evenings from 8pm!

“Appalachian clog dancing can best be described as tap dancing with attitude!” Sue Mills, who founded the group in 2001, laughs. “Originating in the southern states of America, it is a fusion of traditional step dance from Europe, with the native American style. This results in a very powerful and vital dance.”

“There is no traditional choreography as in collected Morris dances, so we make up our own with traditional steps.”

The group not only started to bring enthusiastic dancers together, whilst enjoying live music from Charlwood bluegrass band, Rawbones, but also to utilise the parish hall: 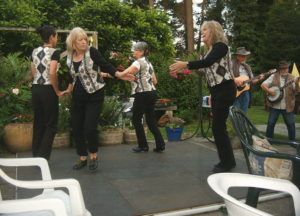 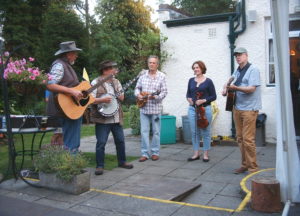 “I set up Anocalypse Now way back in 2001 at the request of two dear friends, Suzie and Colin Gates. They both love music and dance; being very active in Charlwood society, they were also aware that the parish hall was at that time seriously under-used,” Sue explains. “I had left another local dance team three years previously, so was technically at a loose end in dance terms. If I was prepared to teach, then they would do their best to come up with some willing, if slightly arm-twisted, volunteers.”

Now some fifteen years later, the group has ten members and regularly perform at pub events and at festivals!

In The Footsteps Of Joseph Dalton Hooker – A Sikkim Adventure

Is there Cash in Your Attic?

Get Out and About with the Regent Ramblers