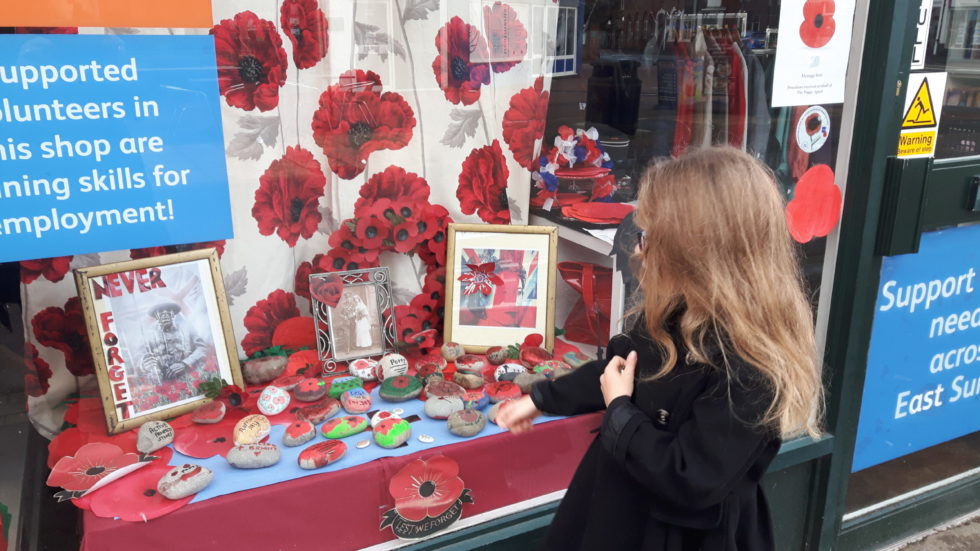 Active Prospects charity shop on Horley’s High Street is celebrating following winning an award from the Royal British Legion in Horley for a remembrance window display. The store which raises money for Surrey charity, Active Prospects was awarded a trophy and the accolade of being the town’s pride and joy at poppy time.

Charlotte Clark, store manager, says: “We were presented with a trophy from the Royal British
Legion for the best Remembrance Day window display in Horley. We fought off a lot of competition, last year Collingwood Batchellor won the honour, we were thrilled as we are relatively new to Horley.”

As well as involving Active Prospects volunteers, the public in Horley were invited to write a personal remembrance message and display it in the window. Active Prospect’s project in Horley was part of commemorative events in the town and across Britain as the centenary of  the Armistice was marked.

Speaking about the display and getting the community involved, Charlotte said: “I love working in Horley and I had an idea that I wanted to use some remembrance stones that had messages on them and display them.’

“I asked local children and people from Active Prospects with learning disabilities who we support to design them, and then with a blue sea background to rest the stones on and a backdrop of colourful poppies and pictures of war heroes it all came together really well” Charlotte added.

Charlotte says that the window display proved to be a positive project which engaged both creative volunteers, customers and members of the wider Horley community, she says: “Our volunteer Cris tirelessly hand-painted lots of paper poppies so a lot of time and effort went into it.’

“It was wonderful to have compliments from customers about the window display and it generated a lot of war stories from the community. I wanted the window to tell a story an important story for Remembrance Day – ‘never forget’.”

Providing The People Of
Surrey With Active Prospects

Active Prospects, based in Reigate is a charity working throughout Surrey to enable
people with learning disabilities and autism, physical and mental health needs to live
full and aspiring lives. For more information about the charity, its work and how you
can help, visit: www.activeprospects.org.uk

Celebrate Diwali In Style In Reigate With Food & Dance

Crawley MP Is The Toast Of British Beer & Pub Association