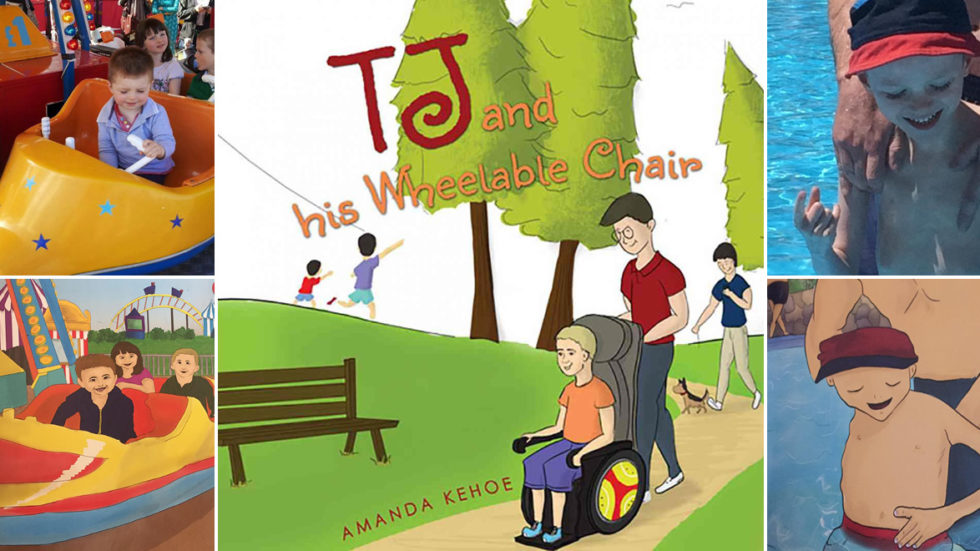 In many ways, Tadhg Kehoe is a typical 9-year-old boy. He lives in Newbridge, County Kildare with his parents and his brother and sister, Dylan and Emily. He loves games, music, swimming, horse-riding and being with his friends – so far, so ordinary. However, in other ways, Tadhg is quite extraordinary.

Tadhg (TJ) has cerebral palsy, and global development delay – the combination of these conditions means that he is non-verbal and needs a wheelchair or walker to get around. Despite these limitations, he loves life!

Those closest to him understand this and know the real TJ, but for others, these things can create a barrier, and it is this that his mum, Amanda Kehoe, is determined to break through, and she has done it by writing a book – TJ and his Wheelable Chair.

Amanda noticed that people often assume TJ’s lack of speech indicates a lack of understanding, and consequently, they tend to talk over him rather than to him making him feel ignored and undervalued. By writing about him, his mum wants to help children realise that just because TJ cannot articulate himself with words, he has thoughts and feelings like they do, and he deserves to be respected and accepted just as he is.

Years in marketing have honed Amanda’s writing skills, and her book uses creative methods to make its point – even before the first page. Using the term wheelable chair in the title, rather than wheelchair she subtly encourages the reader to view it in a new way. The text in rhyming verse adds another dimension, and with illustrations taken from actual photographs of TJ, it is a remarkably clear, accurate and engaging portrayal of what life is like for this brave boy. As the book describes his routines and activities, it helps children identify with what they have in common with TJ, while helping them understand that he does things a little differently.

Amanda says: “I felt that by writing a simple story, from TJ’s point of view, it might create questions from children that need to be asked, and help parents and teachers to answer their questions.”

Its success has come as a surprise to author Amanda, who values the opportunity it gives to share with an ever-widening audience what life is like for someone in her son’s position. Since its publication last year by Austin Macauley Publishers, Amanda has been travelling throughout the UK and Ireland promoting its message.

Have You Got What It Takes To Be A School Governor?