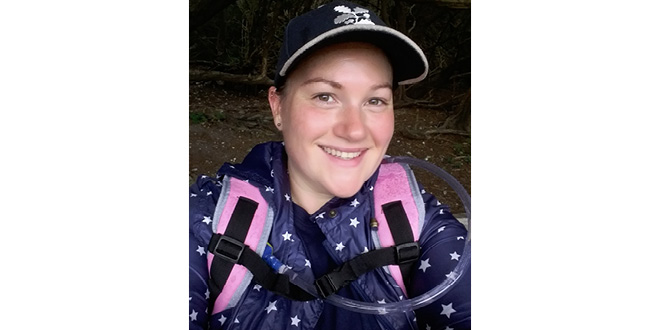 We’ve all driven or caught the train down to Brighton, but not many of us have walked those 27 long and scenic miles. Next month, however, Horley resident Sallyann Richardson will be donning her trusty trainers and trekking half of the London 2 Brighton challenge route, all to raise funds for a very personal cause.

Fourteen years ago in May, Sallyann was hit by a car, knocking her off her bike and leaving her with back and knee injuries. She needed three operations and suffers from long-term pain.

“I just kept telling myself despite the pain everyday there were people in a worst position than me,” Sallyann told us. “Little did I know that my brain hadn’t got over the shock of the accident. So the reason I would wake up in pain and be in pain 24/7 was down to my brain telling my body and pain receptors to be in pain. I would get tired and very depressed and friends couldn’t understand why I was so low and kept telling me I was mad, losing my mind, I looked fine, there was nothing wrong with me. All the time I was starting to think they were right and doubt myself because no one could tell me in the medical world what was wrong.”

“I had several different types of treatment and tablets and still there was no improvement. I began to get serious depression and became a bit of a hermit,” she admits. “Life was coming to a stand-still and I felt like I couldn’t go on living like this anymore. I’d hit rock bottom and given up. I piled on the weight, cut myself off from everyone apart from my parents, Nan and a couple of friends. But basically life stopped. Doctors kept telling me to no longer go to the gym and to rest and that I hurt and was tired because I had a condition called Myofascial Pain Syndrome which meant more medication. I’d given up by this point.”

For Sallyann, the turning point came after her beloved grandmother passed away in 2011. “I sat and thought, hold on, Nan saw me cry every day and be miserable, feeling trapped. She wouldn’t want me to be carrying on like this.

So I dug deep and pulled myself back out of myself. I quit the medication I knew was putting me in this numb state and started pestering doctors to really look into what was wrong. Slowly, over a few years, I got myself back to me.”

After years of suffering, Sallyann was finally diagnosed with Fibromyalgia – a condition that causes pain all over the body, with many sufferers experiencing fatigue, increased sensitivity to pain and even problems with memory and concentration.

Since her diagnosis, she has tried to live life to the full and also raise awareness of the syndrome by taking on challenges (like the London 2 Brighton on 28th May) for charity Fibromyalgia Action UK.

“I chose Fibromyalgia Action UK as I stumbled across them when I did my first charity walk last year. They have been great and appreciate the help that myself and thousands of others do in getting the awareness of this condition recognised, so others don’t have to spend years giving up!”

The London 2 Brighton is the first of two mammoth treks for Sallyann over the next few months, as she will also be taking on the 100km South Coast Challenge in August, again to raise donations for the Fibromyalgia Charity, along with the Brompton Fountain (supporting children with life threatening medical conditions) and Macmillan Cancer Support.

School’s Out… Now What?

Get In Tune With Elena