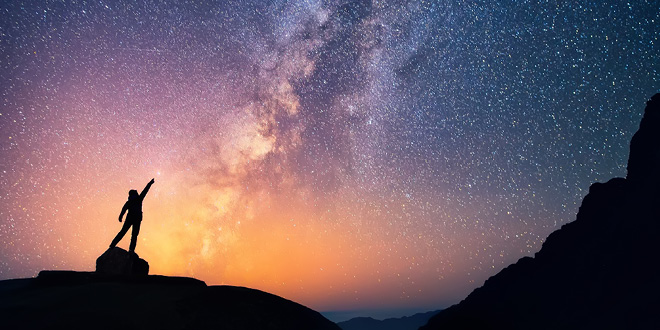 East Grinstead is developing something of a history when it comes to Astronomical matters. In January, Sackville teacher, Steve Bush was awarded the prestigious Patrick Moore Medal for Education 2016 by the Royal Astronomical Society. The school is now recognised as a ‘Leader in Space Education’, a rare accolade to hold in the UK.

The towns’ links with star gazing go back to William Sadler Franks who was employed by F J Hanbury to work at Brockhurst Observatory in East Grinstead in 1910. Patrick Moore observed him to be ‘gnome like’ in his appearance due to the skull cap, small stature and beard. Apart from the occasional visits from Mr Hanbury’s guests, mainly business associates, Franks was allowed to use the observatory for his own studies. In 1933, Franks welcomed ten year old Patrick Moore with his father to observe the skies over East Grinstead. They were clearly enthused by what they saw, as they returned the next week. It was during this year that a series of misfortunes befell Franks. First he was knocked down by a cyclist and was unable to work for a month, followed shortly by a bout of illness that laid him low for over four weeks. The final straw came when he suffered a cycling accident and subsequently died at only fifty eight. It was at this time that Patrick Moore, who by then was fourteen, was invited to show visitors views through the telescope. In 1939, following on from Hanbury’s death, the observatory was sold off.

Sir Patrick Alfred Caldwell-Moore was born in Pinner in 1923 but raised in East Grinstead. He was home educated due to heart problems in childhood. Aged eleven, he became a member of the British Astronomical Association and then, much later he became its President. By sixteen years of age, Moore began wearing his signature monocle and was fitted with a full set of dentures three years later!

During World War II, he joined the Home Guard in East Grinstead, where his father had already been elected Platoon Commander. He was also the founder of East Grinstead’s Chess Club and
had much involvement in the local Scouting movement. In May 1965, Cubs and Scouts from all Groups in the East Grinstead and District got together to say thank you for his encouragement in gaining badges in Astronomer Star man, Meteorologist, Archaeologist and Weatherman Badges. During the 60’s he became a familiar face to many for his appearances connected to the Space Race. In the 70’s, he was often seen playing the glockenspiel and xylophone on popular entertainment shows, appearing with Magnus Pike and was easily recognised for his unusually quick staccato speech and monocle. He went on to host BBC’s Sky at Night for over fifty years, which won him the title of longest serving presenter. He wrote in excess of seventy books and despite his early ill health, went on to live to eighty nine years old, dying in 2012.

For anyone wanting to find out a bit more about the night sky, Steve Pond hosts regular open events for people to attend with their telescopes on Lingfield recreation ground.

Getting a buzz out of keeping bees