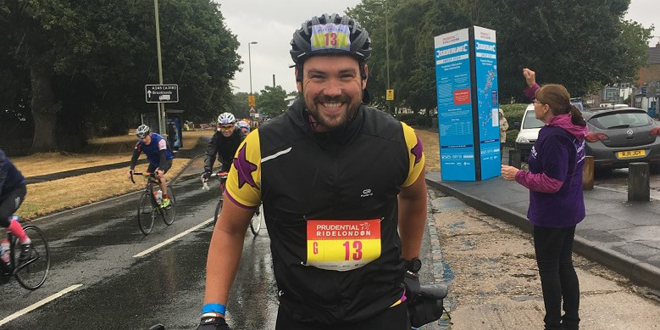 Actor Sam Attwater, 32, took part in the grueling Prudential Ride London this summer for The Children’s Trust and raised more than £3,000 for the Surrey-based charity.

The former EastEnders and Hollyoaks star finished the cycle challenge in seven hours 11 minutes which followed hot on the heels of running the London Marathon which he took on earlier in the year.

Best known for playing Leon Small in EastEnders, he also won the sixth series of Dancing on Ice in 2011 and he also participated in the All Stars’ series in 2014.

Speaking about the ride, Sam said: “It was a tough and very wet 100 miles, but the amazing work The Children’s Trust does and support from friends and family along the route kept me going.”

The Children’s Trust runs a range of specialist care, education and therapy services for children and young people with acquired brain injury (ABI) and is based at the charity’s base in Tadworth.

For more information about The Children’s Trust and its activities, visit: www.thechildrenstrust.org.uk/home

Roll Up, Roll Up For The Dormansland PTA Family Circus