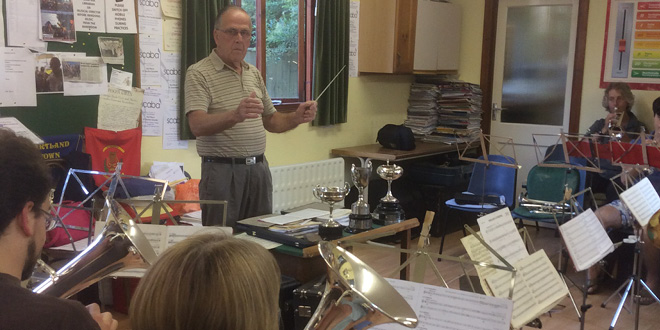 September is an exciting month for Lingfield’s Silver Band as not only are the longstanding group gearing up for a concert on Saturday 26th September, but their musical director will be celebrating twenty-five years at the helm too.

Visitors to the concert, which will be held at St Peter and St Paul’s Church in Lingfield, from 7:30pm can expect to hear a varied repertoire of marches, waltzes and overtures – the perfect live soundtrack for a Saturday night.

The concert will also mark the group’s (which started over one hundred years ago) musical director, Roy Fuller’s, silver anniversary, by presenting him with a cup, commemorating his time with the band.

“Roy has been involved with the band for a long time and prior to becoming musical director, played at important concerts as a guest,” Julie Scrace from Lingfield Silver Band says, about the Dormansland resident. “He was previously involved with Edenbridge town band, both as a player and musical director.”

The group also welcome new members and young players to join their main and youth band practises, which take place on Thursday evenings in the band room behind the Greyhound Inn, Plaistow Street, Lingfield. If you are interested in joining this great local group, call Julie on: 01342 833400.

Tickets for Lingfield Silver Band’s concert on Saturday 26th September cost £6.00 per person and £5.00 per concession.

Boomerang Hickstead With Jessie J and The Vamps