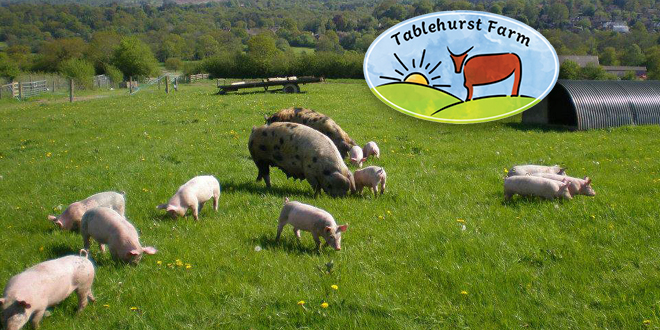 A Forest Row farm where food is produced in harmony with nature and the earth.

Customers come from as far as London and Brighton to Tablehurst Farm, in Forest Row, where they can buy food including meat, fruit and vegetables that have been grown using biodynamic principles.

As a biodynamic farm, Tablehurst embraces the idea that the earth is a living organism and that each farm is an individual organism within it.

It is a concept that Jeremy Smith, the farm’s development manager, says is growing in popularity.

“The farm and garden are run as a holistic organism, and all fertility, as well as most of the food for the animals, is produced on the farm itself,” Jeremy says.

A biodynamic farm functions as a strong, self-sustaining and vibrant single organism that recognises and respects the basic principles at work in nature, Jeremy adds.

“It is a complete system in which all the different components of the farm are seen as parts of a greater whole. With farm animals at the centre a self-sustaining, balanced and harmonious environment is the result.

“As a community farm Tablehurst seeks to provide possibilities for people to understand farming and food production better. We encourage people to come, as visitors and customers, to re-connect to the land and their food.”

Most of the farm’s customers are from the local area but others come from further afield.

“I was one of these,” says Jeremy. “Before my wife and I moved to Forest Row, I used to make frequent trips from Berkhamsted in Hertfordshire – a round trip of 150 miles – just because we loved the wonderful biodynamic food and couldn’t get it elsewhere.

“Tablehurst is a mixed farm – which is quite unusual these days – and produces meat, rearing beef cattle, sheep, pigs, poultry, arable crops and grains, as well as vegetables and soft fruit.”

The farm and garden also supply the Tablehurst café, a popular venue for families with young children, and with shoppers who like to enjoy the views over the fields towards Ashdown Forest.

Both Tablehurst and its sister farm Plaw Hatch, in Sharpthorne, are experiencing significant growth in demand year-on-year.

“We’re finding we have to employ more people,” says Jeremy. “Young farmers and growers want to stay with us, and some of them are starting families here, which is wonderful.”

The farm has a series of special events coming up, including an Open Day on Sunday, July 10, the first since 2011. There will be a food court, children’s play activities, craft and produce stalls, talks and music, tours of the farm by tractor and trailer, and more.

Digance demonstrates the art of versatility