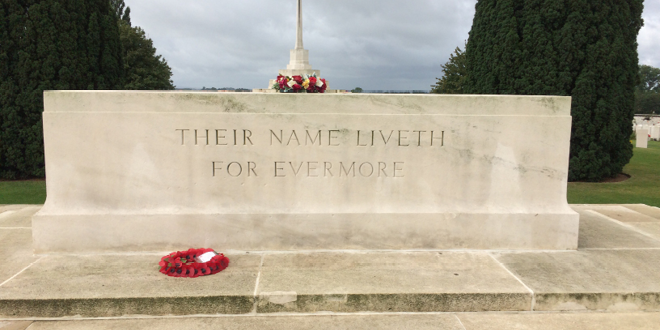 “It starts with a name, and ends with a story” Mike Selcon

Attending one of these tours is an opportunity to retrace the footsteps of relatives who fought in either the First or Second World War.

As two of the most experienced battlefield guides working today, Andy and Mike understand how to draw those travelling with them into the subject of war.

Emphasis is placed on the human aspects of these conflicts, illustrated with stories from the lives of individual soldiers and whilst many battlefield tours are no more than a scripted guided coach journey, Eyewitness Tours are a genuine experience.

Between April 8 – 11 2017 members joined Andy and Mike on a coach tour to Vimy Ridge and Arras in Northern France to commemorate the 100th anniversary of the death of a Surrey-born war poet.

Poet, Edward Thomas, died on the first day of The Battle of Arras – Vimy Ridge and Arras are two of the most defining battles of the First World War.

The group visited the Vimy Canadian Memorial Park which bears the inscribed names of 11,168 missing soldiers who were killed in action in France, the Cabaret Rouge Cemetery and the Wellington Quarry tunnels.

Later this year, Eyewitness Tours are offering an unmissable battlefield experience. Between October 7 – 10 2017 there is a chance to be a part of a guided three-day coach tour to Passchendaele and Ypres, in Belgium.

Known as the Third Battle of Ypres, this battle was a main campaign of the First World War, a brutal battle fought by the Allies against the Central Powers. During the tour, there will
be a chance to understand the context in which this battle took place.

There will be opportunities to attend the daily ceremony at the striking Menin Gate, cross the battlefields of 1917 where so many lives were lost and to visit Essex Farm, where the famous poem In Flanders Fields by John McCrae was written.

There is also a chance to reflect in the beautiful and poignant cemeteries of Tyne Cot Commonwealth and Langemark in the province of West Flanders. All accommodation, meals and museum entries are included in the price.

If you are itching to find out more about a relative who fought in either war, head researcher, Mike Selcon at Eyewitness Tours can provide a silver research package. This includes thorough search for all available documents relating to your family member and a comprehensive overview of the information that is held on these documents.

Mike Selcon started carrying out genealogical research following six years of service as a navigating officer in the British Merchant Navy and thirty years’ service as a police officer.

“Not only had Mike found all of the available military records relating to my grandfather, but he delved into my grandfather’s early family life, giving me an insight into the hardships of his childhood and the dangers he faced in World War One” said a client.

[box type=”shadow” align=”” class=”” width=”600″]If you are interested in finding out more information about the upcoming tours, www.eyewitnesstours.com/[/box]