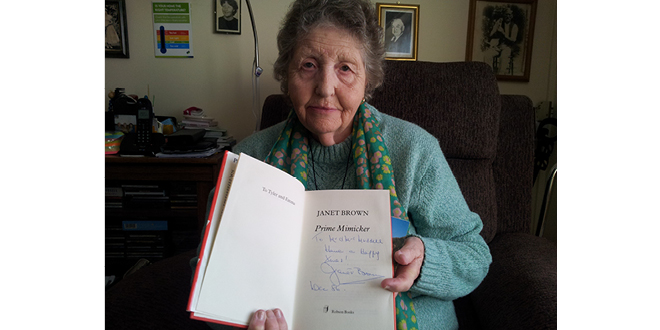 This month marks the fifth anniversary of the passing of Janet Brown, former Danehill resident known to millions for her brilliant impersonations of Hilda Ogden, Esther Rantzen and most famously former British Prime Minister Margaret Thatcher for which she is best remembered.

Janet and her husband, the comedy actor and comedian Peter Butterworth, star of a total of 16 Carry On films are affectionately remembered by Betty Muddell whose late husband Dick was a gardener for the couple at their country retreat in the Mid Sussex countryside.

Betty fondly recalls: “They were a lovely couple, really genuinely lovely. Peter was a funny man – he was even more comical in person than he was on screen when in character.’

“I remember his humour, he once offered to sponsor me slimming. He said ‘I cannot lift you Mrs M or I’ll get a hernia.’ He was only saying it in jest and that was him all over.”

Peter, born in February 1919 in Cheshire made his Carry On debut in Carry on Cowboy before making a further 15 appearances in the popular comedy franchise. He was also a regular on children’s television and radio programmes and appeared in Doctor Who.

The sixth most prolific Carry On performer, Peter married actress and impersonator Janet Brown in 1947. The couple had two children, Tyler Butterworth who is now an actor born in 1959 and Emma Butterworth who was born three years later, Emma died in 1996 aged just 34.

“Peter idolised the children. I remember watching TV a couple of years ago and Tyler was appearing – he is just a spitting image of his father, incredible!” said Betty.

In January 1979, whilst starring as Widow Twankey in Aladdin at the Coventry Theatre, Peter was found dead in his hotel room of a suspected heart attack after failing to arrive for an afternoon matinee performance. Out of respect the rest of the pantomime’s run was cancelled.

Gaining considerable fame in the 1970s with her performances on the BBC’s Mike Yarwood Show and BBC Radio’s The News Huddlines, Brown’s career grew from strength to strength but it was after the General Election of 1979 that it really snowballed.

She became a Margaret Thatcher impersonator, appearing in the 1981 James Bond film For Your Eyes Only as the then Prime Minister. The two even became friends meeting over the years at both Downing Street and Chequers.

Betty, says: “Janet loved Sussex but remained proud of her Scottish roots. She was a successful and attractive woman but despite this she didn’t bother with anyone else after Peter’s death.”

Following a brief illness, Margaret Thatcher’s double Brown who spent the rest of her life in Sussex died in a Hove nursing home aged 87. She successfully juggled a career and family whilst remaining a popular and versatile perfomer. She is buried beside Peter in Danehill cemetery.

Behind The Scenes: Scope Haywards Heath And How You Can Help Out