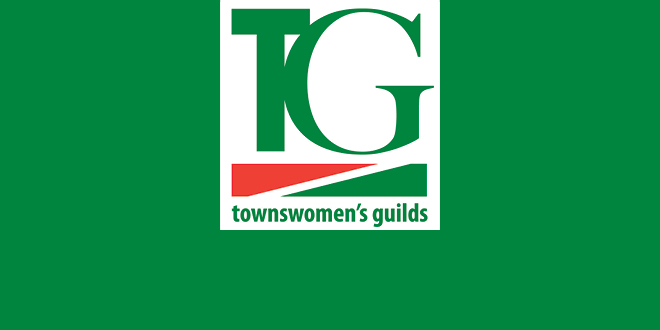 At first glance, the red, white and green logo of the TG looks rather like that of PG – the famous beverage, however the similarity is purely coincidental.

For the Townswomen’s Guild, these colours signify something far more weighty than light refreshment. Red is for Courage, White for Faith and Green for Hope – and although it’s not unknown for the humble cuppa to inspire these qualities, it was these three colours that were adopted by Women’s Suffrage, the monumental movement in which the Townswomen’s Guild has its roots.

Founded in 1929 by Dame Margery Corbett-Ashby and Mrs Hubback, the Guild was originally set up to teach good citizenship to women after they won the right to vote from the age of 21.

Dame Margery was an enormous influence in the fight for women’s rights and when she died in 1981 at the age of 99 The Times declared that ‘Probably no one has done more for the emancipation of women during the century than Margery Corbett-Ashby’.

For the past nine decades, her Townswomen’s Guild has continued to grow, and there are now nearly 700 guilds nationwide – including our local group in Horley!

The Women’s Movement has come a long way in the last century, and the Townswomen’s Guild has played a significant part; however, there is still work to do, and their current campaigns include Modern Slavery and Pension Equality.

It’s not all seriousness though, and there are plenty of opportunities for TG members to relax and have fun. Each guild’s activities are as varied as its members and include cooking, crafts, demonstrations, speakers, fund-raising, book clubs… the list goes on.

Horley’s guild meets twice monthly at the Methodist Church Hall in Victoria Road on every second and third Friday at 2.30pm with a mixed programme of events – regular speakers talk on a wide range of subjects.

The meeting on the third Friday is specifically a social gathering for craft, Scrabble, etc… or just chat. There is a monthly lunch club, a reading group, occasional local outings, and informal lunchtime gatherings, and all the usual festive celebrations.

Fundraising is an important part of their work, and the Horley TG supports Romanian Aid Foundation (RoAF) which provides humanitarian aid throughout the year and ‘Joy in a Box’ shoeboxes to Romanian children each Christmas. Closer to home, they sponsor ‘Mack’, a gorgeous Labrador puppy currently being trained by Canine Partners.

So what are you waiting for? All newcomers will receive a warm welcome – there is no age restriction, and younger members are especially needed, but whatever your age there’s something for everyone: companionship, culture, community concern, campaigns, creative crafts and (I’m hoping)cake! Now where’s that PG….?

Fighting For A Cure With The Lily Foundation

Horley Flower Club are Back in Bloom!