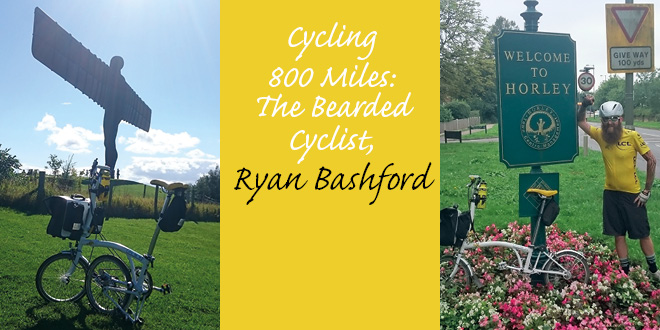 If you’re a regular reader, you’ll know that there’s nothing we love more than featuring the inspirational lives of local people – and we think that Horley resident, Ryan Bashford’s story is definitely one that will make you smile, give you a zest for life and perhaps even enthuse you to take on your very own challenge for charity.

Ryan, also known as The Bearded Cyclist, originally started cycling for charity (as a “new hobby, something that didn’t involve drinking,” he told us) in 2012; taking on both the London to Brighton and London to Paris rides. However, just months after completing the challenges, Ryan, who lives in Langshott, received the news that he had Wolff-Parkinson-White (WPW) syndrome – a condition where the heart beats abnormally fast, and that exercising, and his beloved bike rides needed to be curbed, in fear of him suffering a stroke.

Thankfully, Ryan had a successful operation which saw him given a clean bill of health and back on his bike, within six weeks, raring to take on yet another challenge – this time for the British Heart Foundation, without whose research, his procedure would have not been possible.

We chatted to Ryan, just after his ten day 800 mile cycle, on a folding bike, to talk fundraising, fitness and living life to the full: 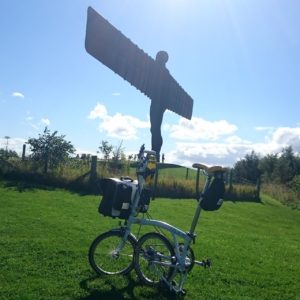 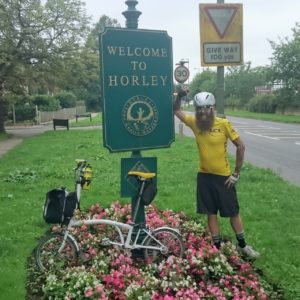 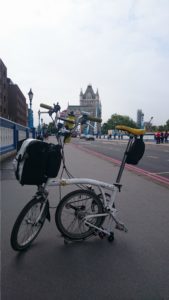 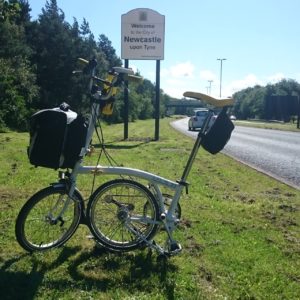 Why did you decide to cycle the 800 miles, from Edinburgh to Horley?

I decided on this event, as I have never been to Scotland before and wanted to do a big challenge to show that I am fit and healthy and to pay a little something back to the guys that helped to fund the research used to fix my heart and others. I chose the Brompton folding bike as it would be more challenging and, I would get to see the country from a different view other than whizzing along on the road bike.

What was the best part of the challenge?

For me the best part of the challenge was seeing so much of England and meeting so many fascinating people, I thoroughly enjoyed seeing the landmarks
such as the Angel of the North and castles of the north, as well as the UK’s amazing countryside, and the differences of cultures on the way down.

And what was the worst bit?

I didn’t really have any worst parts of the journey, I had punctures and times that I had to stop to make minor adjustments to the bike, but it felt good knowing that I had the knowledge and skills for anything I experienced.

How has your life changed over the last few years, since your diagnosis with WPW?

I feel that my life has changed dramatically, being diagnosed and fixed has taught me that life is too short to be sitting on the sofa or sitting in the pub wishing or dreaming, nothing is better than getting out there and doing it. I have been motivated to do more with my life, help others and experience life!

Do you have any other fundraising plans or ideas?

I am always looking for new challenges, and would rarely turn any down, I feel that I have covered the UK with cycling challenges and would like to go further afield, in Europe, Australasia or the Americas in the near future.

And finally; what would you say to someone who is thinking of doing something out-of-the-ordinary for charity?

I would highly recommend it! Do some research, pack your bags and go!

To date, Ryan has raised over £1,400 for the British Heart Foundation. If you would like to donate, visit: www.justgiving.com/RB3C2015/

We can’t wait to see what he does next!