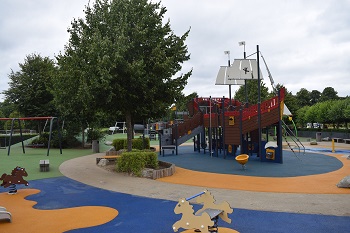 Reigate’s Priory Park now has an exciting nautical-themed playground which reopened in the summer following a six-week refurbishment project to replace the 12-year-old deteriorating equipment.

The revamped play space features challenging equipment, with something for children of all ages and abilities, and the nautical theme sits with the park’s rich and vaired identity and historic setting.

The park is multifunctional, with bold colours and a 360-degree design which is accessible from all angles offering diverse play opportunities and easier for parents and carers to keep an eye on children.

Reigate & Banstead Borough Council executive member, Cllr Natalie Bramhall, said: “We hope children and their parents and carers will love the new equipment and the countless opportunities it offers.”

As well as a playground revamp, Priory Park alongside Memorial Park in Redhill has been recognised by the Green Flag Award Scheme, now in its third decade, as some of the best green spaces in the world.

The parks are among a record-breaking 1,970 UK parks and green spaces and 131 in 13 other countries around the world, that have received a prestigious award – the mark of a quality park or green space.