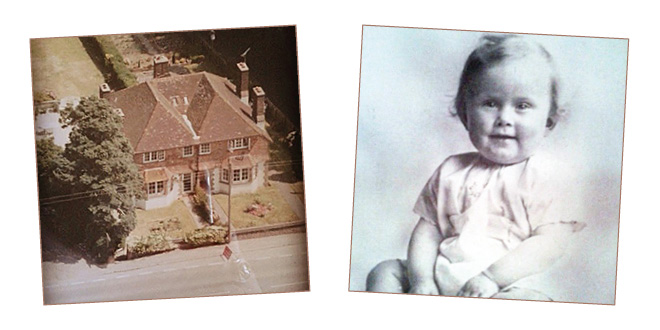 Molly Lawson was born in 1920 in Cob Cottage, Ardingly and this is where she has continued to live all her life. She lived with both her parents who married during the First World War in 1917 and previously, their ancestors had been living in Ardingly since 1784 – Ardingly born and bred! She reminisced about her happy childhood and explained how different the village looked and behaved back in the twenties. The sense of community was deep-rooted in the village, everyone knew each other, and there was a sense of belonging.

When Molly was eighteen in 1939, the Second World War broke out, and she was called up to work in London at the old HMV Gramophone factory. Along with other men and women, her
job was to make the flooring of radio location vehicles which was extremely strenuous work.

During 1939, the German’s invaded France and were growing closer to English soil, causing a nervous disposition throughout the country. This was interrupted by the arrival of Canadian servicemen, particularly in Sussex. Before Christmas, the government put a call out for families across Britain to provide hospitality for the men over the festive period. Molly’s friend’s family wrote to the commanding officer and requested the company of two officers, but made it clear that they didn’t want rowdy men, but ‘quiet’ ones!

When visiting their home, Molly immediately took a liking to one handsome man called Frank who reciprocated her feelings, and they ended up spending the entire holiday season together after their meeting. Molly expressed how hard it was when Frank left her to serve with the British forces. Ardingly had become his surrogate home, and they had fallen in love. Once or twice a month, they would be able to send each other letters to reassure each other of their safety and to express their feelings. However, it would be on their honour not to reveal anything detrimental.

In June 1943, Molly and Frank married at St Peter’s Church in Ardingly and the following year they fell pregnant with their first baby.

On the 6th June 1944, after an emotional goodbye, Frank joined the assault troops on D-Day. Knowing little about Frank’s safety, Molly gave birth to a baby boy named John while Frank was away fighting. After surviving this pinnacle fight, Frank returned home on leave and was welcomed by his new family. ‘We were one of the lucky ones’ Molly expressed, her eyes filling with tears, reminiscent of that special day.

After the war had ended, they moved to Canada for a year in order to receive a Canadian pension in Britain and Molly got her chance to meet her husband’s family. To this day, Molly is in frequent contact with her in-laws in Canada and this continued relationship reminds her greatly of Frank, who sadly passed away 10 years ago in 2006. Their love survived the war where others weren’t so lucky and they really did love until the end. This love is valued by their children and their children’s children and will never be forgotten.

The Half Moon Inn