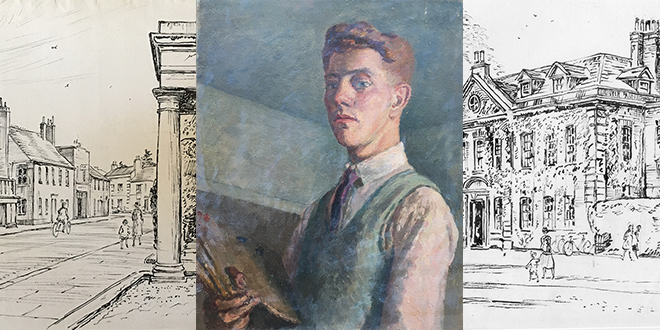 The exhibition, Stunning Lines is now on display at Horsham Museum’s Watercolour Gallery, a fitting location for one of the leading watercolour artists of the 20th Century who later became vice president of The Royal Watercolour Society. Among the works on display are the pen and ink drawings which portray the places and people of the Horsham area in the 1930s when Lines was the head of Horsham Art School.

Vincent Lines’ family has made the generous gift of 20 works of art, including 10 drawings of Horsham and the local area to the town’s museum, featuring landmarks such as St Mary’s Church, Chesworth Farm, Park House, and Market Square, illustrating Horsham in a bygone era. The Lines art donation inspired Horsham Museum’s 2019 calendar, called Stunning Lines.

Vincent Lines came to Horsham in his 20s to take up the position of principal at the prestigious Horsham School of Art and under his leadership, the school flourished throughout the 1930s. It was Vincent who appointed the renowned stone letter carver and typeface designer and artist David Kindersley, whose work can be seen on display at the main gates to the British Library, to teach at the school.

During the Second World War, Lines who was living in Horsham at the time, was asked by Sir Kenneth Clark to join a team of watercolour artists to record Britain at a time that it was feared  areas would be destroyed by bombing. Starting in the South East of England, they moved across the country using watercolours in the hope that the scheme would help preserve this characteristic medium.

During this period, more than 1,500 watercolours were produced in the project with Lines painting local scenes including The Causeway in Horsham. After the war, Vincent moved to Hastings on the East Sussex coast where he became principal of the Hastings School of Art. He continued to draw and illustrate before passing away suddenly in 1968 aged 58.

A Work Of Art

A Date For Horley Residents’ Diaries

Be Bowled Over By town’s Charity Skittles Tournament