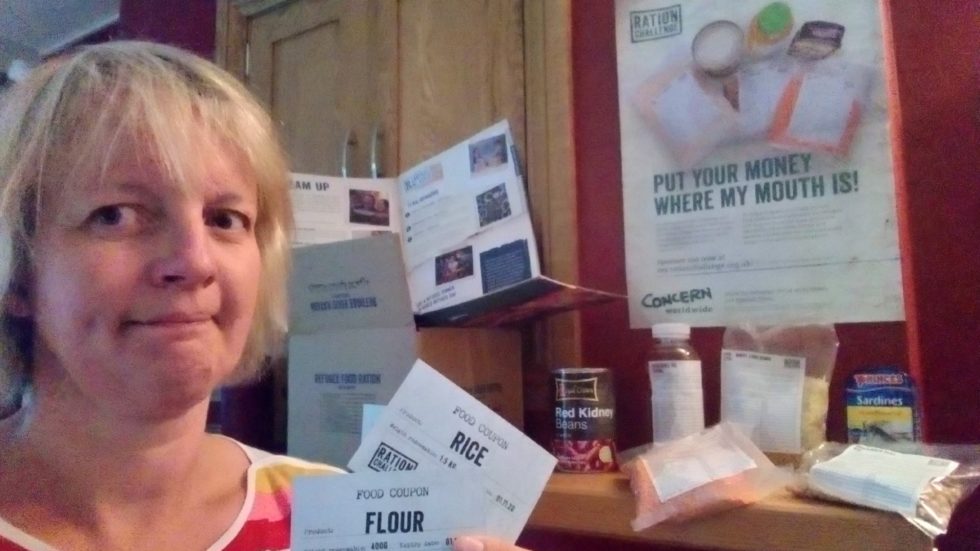 According to the United Nations High Commissioner for Refugees (UNHCR) there are more refugees and displaced people around the world than at any time since the Second World War – 68.5 million. Motivated by this astonishing statistic, a sales assistant from Horley has completed a refugee ration challenge to help raise awareness of the serious plight of some of the world’s most vulnerable people.

Horley resident, Joanne Hunter, a sales assistant at WH Smith at Gatwick Airport, decided to sign-up to support refugees around the world by eating rations for a week, thinking it would be easier than running a marathon. The challenge, organised by CONCERN Worldwide (UK) saw those taking part limited to a food pack a refugee would be issued, but which could be supplemented by fundraising.

The ration packs featured ingredients – flour, rice, lentils, beans, fish and oil which could be improved by earning other food items through fundraising rewards such herbs and spices as a resourceful refugee might by selling handicrafts to provide for them and their families – early fundraising efforts saw Joanne raise enough to select sumac, a Middle Eastern spice.

Through fundraising Joanne earnt seven tea bags, unlimited salt, once she raised £125, 150g of fruit by forming a team of fellow fundraisers, and 50g of sugar for making a sponsorship video. She explains that teamwork was important to completing the challenge, especially connecting by social media to share humour, inspiration and encouragement between rationing fundraisers.

The ration challenge saw Joanne develop new cooking skills, one new dish which she prepared was rice milk bread, she says: “It was a huge learning experience, including making rice milk bread. I discovered that I absolutely do not like the sensation of the gloopy flour and water sticky-dough on my fingers and that we can all make so much more than we realise out of basics.”

The UNHCR, the agency which supports refugees estimates that the number of refugees is growing at an unprecedented rate – each day, 44,400 more people are forced to flee their homes due to conflict, persecution and natural disasters. Of those, 57% come from just three countries – South Sudan (2.4 million), Afghanistan (2.6 million) and Syria (5.6 million).

Joanne admits she faced hurdles, saying: “Approximately, I needed 100g extra flour due to earlier dusting it all over the kitchen, and having to break my fast 12 hours early due to sleeping four hours in a 24-hour period and an increasingly emotional state – I made a penalty donation. I found the experience rewarding and eye-opening!”

Joanne raised almost £200, by taking part in the Ration Challenge UK 2019 her fundraising will go towards providing medical visits, teaching kits, and emergency food rations for refugees across the world – she says she would like to thank every one of her sponsors as she says the most vulnerable in the world should know, there is hope.

Can you help the world’s refugees in their time of need? CONCERN Worldwide’s
mission is to end extreme poverty – whatever it takes. When disaster strikes, the
charity’s aid workers are among the first on the ground – they stay to help
communities build brighter futures. For more information about CONCERN Worldwide,
its work and how you can help the world’s refugees, visit: www.concern.net

Beat A Burglar Before They Start