Working as a firefighter is not just a career for so many, it’s a caring way of life. This month’s Community Hero has not only worked as a firefighter for over twelve years, but is also a member of West Sussex Technical Rescue Unit – a small team that can be deployed nationally and internationally to major incidents such as collapsed buildings, major floods, earthquakes and Tsunamis. We caught up with Adrian, who lives in Crawley Down, on return from a search and rescue deployment after the recent devastating earthquake in Nepal: 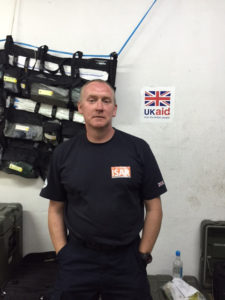 “I enjoy the thrill of not knowing what our next job might be, it could be a relatively simple horse or cow rescue in West Sussex or to help with the relief effort following an earthquake in an overseas destination,” the dad of two tells us.

“The deployment to Nepal was my first international search and rescue mission and I had the honour of leading the West Sussex team. Taking our place amongst the 67 strong UK team and working together to help the Nepalese community in their time of need has been the proudest moment of my career so far.”

Adrian, who has lived in the village for most of his life and also served time in the army, joined the Technical Rescue Unit (TRU) in 2013 and as, he explains, can be called to help rescue animals and people locally, nationally and even internationally:

“The TRU carry out rescues that involve animals, rope work, swift water, flood and confined spaces. Day to day the majority of our calls involve animal rescues, we get a lot of calls to horses and other animals that are trapped or stuck.”

“The team has also been deployed to New Zealand after an earthquake, Japan following a Tsunami and Haiti following another earthquake. Closer to home, last year, we were deployed to Reading to help with the flooding and we helped UKAID, with the logistics of sending aid to the Ebola crisis.” 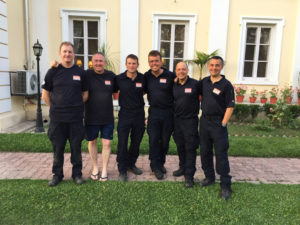 Sarah Smith, West Sussex Fire and Rescue Service Communications Officer adds: “Adrian is part of a larger team making a real difference in often dreadful circumstances. We are extremely proud of Adrian and the other members of our Technical Rescue Unit whose search and rescue expertise is internationally recognised.”

A big thank you to Adrian to finding time to chat with us! If you are interested in joining the fire service, visit: www.westsussex.gov.uk/fire.

Grab A Bargain & Be A Hero

Roll Up, Roll Up: Copthorne Carnival is back!

When the Queen came to Crawley…

Bounce to the beat