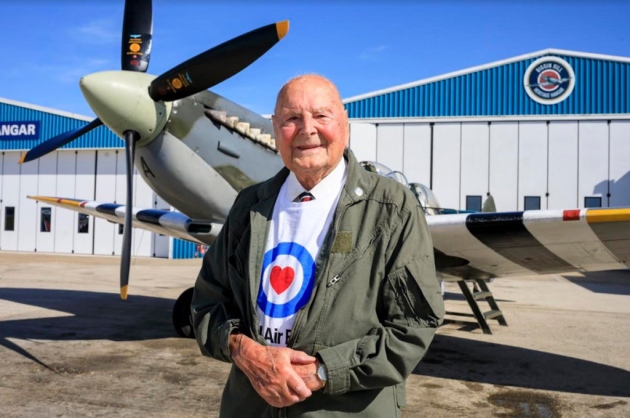 Are you or is someone you know a Royal Air Force (RAF) veteran who is looking for support? If so, the RAF Benevolent Fund would like to hear from you as the organisation can offer help to those who need it. As the fund begins a national campaign searching for military veterans, one Crawley based leading aerospace firm has got behind the search with staff hearing from a wartime pilot.

As the RAF Benevolent Fund searches for military veterans, Crawley-based Thales Group has given its backing to the campaign to find RAF veterans who are in need of help and support. As part of the company’s backing, Second World War veteran pilot George Dunn DFC spoke to Thales Group staff this winter and explained why the RAF Benevolent Fund’s appeal is so important to veterans.

George, 97, who lives near Brighton, told Thales Group employees about his wartime service, flying with Bomber Command having signed up to the RAF at the tender age of just 17. George described to keen listening staff one of the most famous operations he took part in – the raid on Peenemunde on the German Baltic Coast in August 1943, which destroyed the infamous Nazi V Bomber capability.

George was joined at the special and informative talk to Thales Group employees by RAF Benevolent Fund ambassadors Bob Greig and Rob Bugden, who are also RAF veterans. They were representing the charity, which Thales Group has been a generous supporter of, to ask staff to join its centenary campaign to help RAF veterans in need, and ones often who are unaware of support they can obtain.

Ambassadors Bob Greig and Bob Budgen say: “The RAF Benevolent Fund has launched this campaign to mark 100 years of support it has already given to the RAF Family, serving and retired personnel and their families. We’re aiming to double the number of people who receive help, from 53,000 people to 100,000 people and to do that we need the help of companies like Thales in the UK.”

To date, Thales Group has donated more than £100,000 to the fund, and has a representative, Malcolm Crayford, on the fund’s Centenary Campaign Advisory Board, who said: “Thales has enjoyed a long heritage of supporting the Royal Air Force; we have also supported the Royal Air Force Benevolent Fund. Today, Thales is proud to be supporting a new campaign from the RAF Benevolent Fund.”

The Royal Air Force Benevolent Fund is the RAF’s leading welfare charity, it exists to
support current and former members of the RAF, their partners and dependants, whenever
they need help most. In 2018 alone, the charity spent a total of £21m supporting more than 53,000 members of the wider RAF Family in need. For more information about the fund,
how you can support it, or how you can apply for a grant, visit: www.rafbf.org

Reigate Mum To Take The Plunge For Sight For Surrey