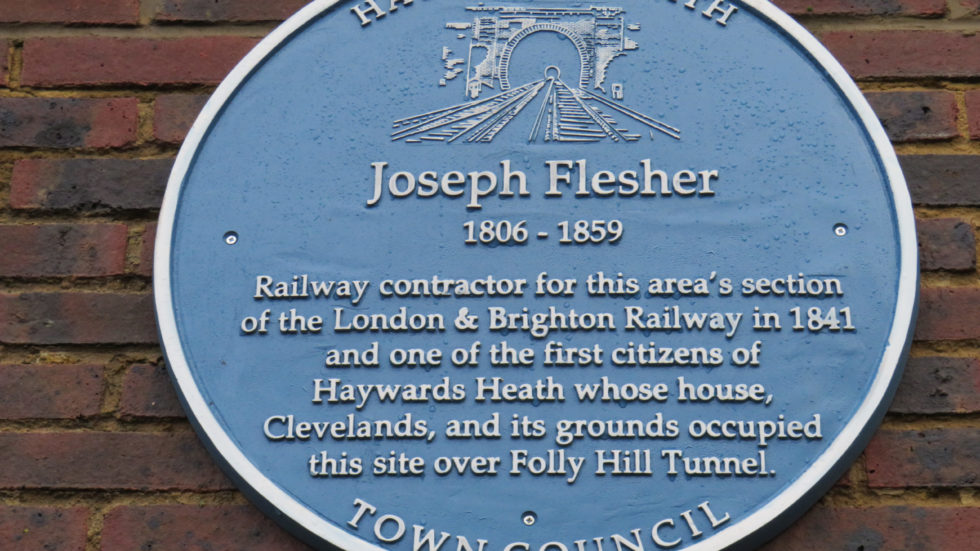 At the end of last year, a blue plaque was unveiled in Haywards Heath to remember railway contractor, Joseph Flesher, who played a role in the construction of the Mid Sussex phase London to Brighton line.

The plaque on the NatWest building at Muster Green was unveiled by Cllr Sandy Ellis and members of Joseph Flesher’s family as a permanent reminder of the engineering efforts of Flesher who died in 1856.

Cllr Sandy Ellis, said: “Haywards Heath Town Council endorsed the adoption of Blue Plaques to show its support for commemorating buildings, famous people or events that have contributed to the history and heritage of this town.’

“This iconic landmark is seen daily by thousands of passengers who travel on the London to Brighton line and it is an honour to be able to leave such a wonderful tribute to a local resident and an outstanding engineer of his day.”

Gwynneth Busfield, great-granddaughter of Joseph Flesher added: “I am so pleased that Joseph’s life has been commemorated by this plaque. Without the coming of the railway to Haywards Heath, we wouldn’t be here today!”

Reigate Friends Poised To Pedal To Paris For Charity