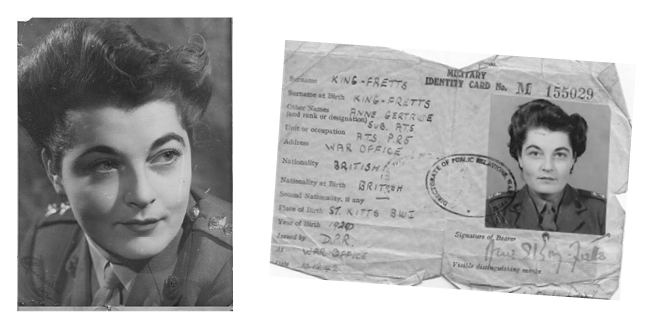 After the fall of France in 1940, a new fighting force was hastily improvised by Churchill to a wage a secret war and to ‘set Europe ablaze’.

The character of the Special Operations Executive (SOE) was dare-devilish – the agents underwent intense training, learning how to kill silently, how to survive torture and how to use explosives and weapons.

Anne Powys-Lybbe, a late Horsted Keynes resident, was born into a Dutch Naval family and spent her childhood in Saint Kitts in the West Indies. When she was eight years old, her family moved to England.

In September 1939, aged 18 Anne was doing a secretarial course in French Shorthand, had many friends and loved her adventurous youth.

On September 4 1939 Neville Chamberlin announced that Britain was at war with Germany and from that day onwards her life changed forever.

Anne joined the Women’s Auxiliary Territorial Service, was issued with an unflattering khaki uniform and found herself in trouble for not polishing her buttons!

She was sent to Edinburgh for military training and had to undergo arduous exercises, marches and lectures.

Once completed, Anne was posted across Britain and ended up working as a War Correspondent.

She conducted talks in cinemas and halls, encouraging women to join the service, and did background checks on people to make sure that they hadn’t had past involvement with enemy nations.

Realising that Anne could communicate in French, a colleague asked her to sign the Official Secret Act, and offered her a job in the Special Operations Executive.

Her first assignment was skydiving into German-occupied France and staying in safe houses provided by brave French families.

She was a courier with a fake identity and taught the Maquis how to blow up trains, shoot to kill, make explosives and to boost morale in the troops.

In Paris, her job was to deliver coded messages to Allied soldiers, these operations would be carried out with the highest level of secrecy.

One night Anne was captured by German soldiers and narrowly escaped death when RAF bombs started to fall nearby.

They ran for their lives and didn’t look back. – leaving France was another matter. At nightfall, the SOE would light flares to guide the Lysander ‘Lizzie’ planes to their hiding spot.

Anne had a tremendous depth of gratitude to the brave pilots who risked their lives to rescue them while being shot at from German Flak towers.

Anne remembered thinking ‘Will we ever see London again?’ They did, but many lost their lives in the SOE.

Soon the British Air Force infiltrated further into Germany; the Russians were advancing from the East and the British Army fought from Italy.

The SOE missions had played an important part in the liberation of Paris, Brussels and ultimately the final victory of the Second World War.

Anne lived to see these liberations, but without the strength and remarkable courage of those who served in the SOE, our victory would have been far harder to achieve.

Anne’s attitude to working for the SOE epitomises her: ‘I don’t want to fight, I hate killing as much as the next person. But I’ll fight an idea like Nazism.’

The Rotary Club Of Cuckfield And Lindfield: From Fundraising To Youth Work

Making a recipe for success!

Behind The Scenes: Scope Haywards Heath And How You Can Help Out