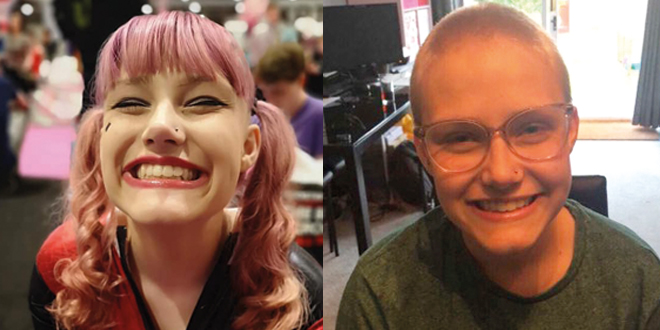 Crawley Down Teenager Braves A Shave For Mental Health Charity

An A-Level student from Crawley Down has had a close shave to raise money for a mental health charity by going under a set of clippers as part of a sponsored head shave for MIND, a charity which offers information and advice to people with mental health problems and campaigns for better mental health.

The thought of a head shave might be a hair-raising prospect for many, however, for one Crawley Down teenager, Holly-Mae Robinson, 16, the challenge was one that she could make the cut and raise much-needed money for a charity close to her heart, and one which is working hard to support mental health.

A-Level student, Holly-Mae, who studies drama and photography decided to brave the shave for MIND, a mental health charity, founded in 1946 and whose president is Stephen Fry, motivated after experiencing her own health challenges.

Holly-Mae, speaking about her head shave where the teen lost her locks, she says: “I chose to shave my hair as a fundraiser as I felt it was going to be the hardest thing to do personally.
I felt that a fundraiser would make me the most vulnerable so it would help me raise lots of money for the charity MIND.”

Holly-Mae adds: “I chose MIND to fundraise for as I have struggled with multiple mental health conditions and have had to take various medications. Mental health is still stigmatised even with the advances we as a society have made so I felt bringing awareness to MIND was also vital.”

The charity head shave has seen Holly-Mae raise £475 for MIND, beating her target of £300 which she set herself on the onset of the challenge to support those who need help to meet the day-to-day challenges associated with mental health conditions affecting millions of people across the country.

For more information about Holly-Mae’s fundraising and to contribute to her crowdfunding site where she has already raised more than £475, visit: www.justgiving.com/crowdfunding/holly-mae-robinson

Be Bowled Over By town’s Charity Skittles Tournament