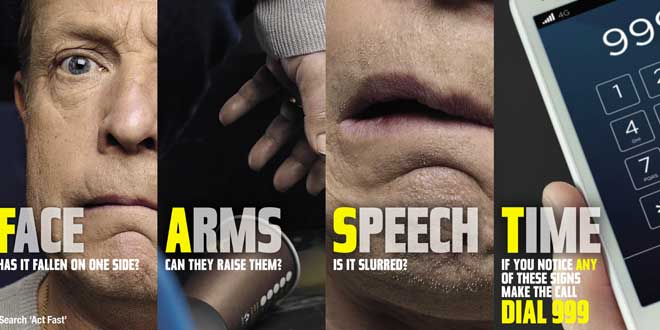 According to the UK Stroke Association, a stroke is the fourth biggest killer in the UK and the single largest cause of complex adult disability. The organisation also estimates that around 80% of strokes are preventable, however, how much do you know about strokes and their symptoms?

Strokes or as some refer to them as, brain attacks, each year affect around 110,000 people in England. Although a stroke is often regarded as an older person’s condition, 25% of those who have a stroke annually are in fact younger than 65 and even includes children. A stroke  is characterised by weakness and the loss of sensation on one side of the body and may also include speech impairment and sight loss.

Some of the major factors associated with strokes include high blood pressure, high cholesterol, diabetes, smoking and obesity. Strokes can be classified by two categories – ischemic, of which more than 80% of strokes are, and hemorrhagic, ischemic strokes are caused by an interruption of blood to the brain, while hemorrhagic strokes result from the rupture of a blood vessel or an abnormal vascular structure.

There is also a condition known as a transient ischaemic attack (TIA), where the blood supply to the brain is temporarily interrupted. This causes what is known as a mini-stroke, which often lasts between a few minutes and several hours. TIAs should be treated urgently – they are a warning sign that you are at risk of having a full stroke, so seek medical advice as soon as possible, even if your symptoms resolve.

Sadly, because a stroke is typically painless, for some it is not seen as an emergency, however, it is very important to act with speed as some stroke treatments are only effective within the first few hours of one taking place.

How well a patient does after a stroke depends on the care that they receive at the time of their stroke, it is vital that a patient receives access as fast as possible to specialist stroke care.

After a stroke, a patient is transferred to a rehabilitation unit following emergency care, where they can receive physio, occupational and speech support and therapy. Staffed by multidisciplinary teams, stroke units can identify and manage the damage caused by a stroke – this is at a time in 2019 that the future management of strokes is encouraging with better care, treatment and major research now available.

There are two main causes of strokes:

Ischaemic – where blood supply is stopped because of a blood clot,
accounting for more than 80% of all cases.

Haemorrhagic – where a weakened blood vessel supplying the brain bursts.

When Your Children Spread Their Wings

When a little bit of what you fancy can do you good….